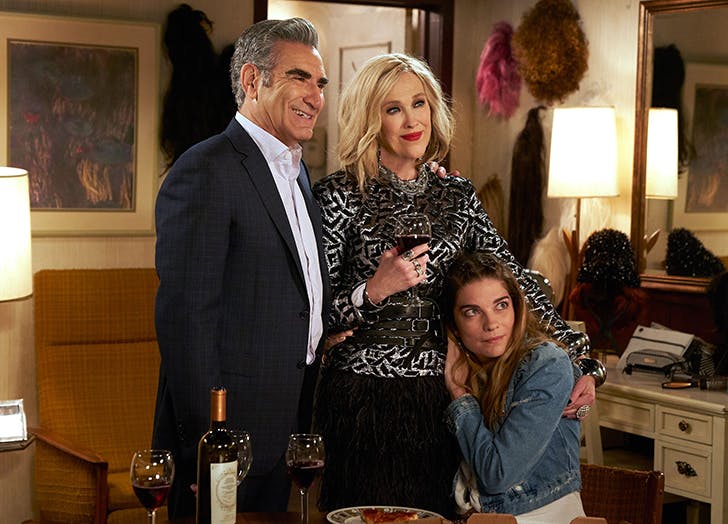 Remember the Rose family’s original home on Schitt’s Creek ? Well, the real-life mansion is now on the market.

That’s right, the massive Toronto home is currently for sale for the cool price of $14.98 million. If the news sounds familiar, it’s probably because it was previously listed back in 2018. At the time, it was priced at $21.788 million, so it’s undergone a major price cut. Holy Schitt!

Th 24,000 square foot home is widely recognized for its exterior, which features gray carved limestone and intricate rod iron gates. Inside, the chateau-style mansion boasts a total of 14 bedrooms and 16 bathrooms, making it incredibly roomy. Not only was the mansion designed to resemble Versailles, but it also features French-themed architectural elements—like gorgeous ceiling frescos that were inspired by the Sistine Chapel. (NBD.)

In Schitt’s Creek , the Toronto home served as the Rose family’s original house, which is confiscated after Johnny (Eugene Levy) learns that his business partner left him bankrupt. The only thing left to the family’s name is a rural town named Schitt’s Creek , which is where they’re forced to start over.

Although the series originally premiered on Pop TV in 2015, it didn’t gain widespread popularity until the episodes became available to stream on Netflix. (Go figure.) All six seasons are still available for your viewing pleasure.

Stay up-to-date on every breaking story by subscribing here . Sign Up for PureWow NewsEVERYTHING YOU NEED TO STAY UP TO DATE ON THE LATEST IN CELEBRITY NEWS AND ENTERTAINMENT requiredrequired*SIGN UPTerms & ConditionsNO THANKS, I’M ALL CAUGHT UP