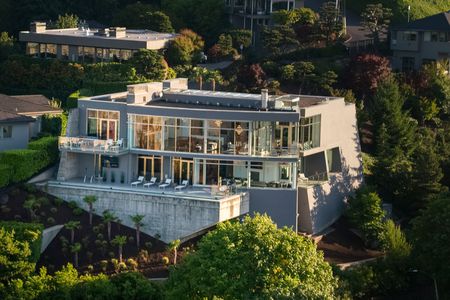 The prominent modern glass mansion in Portland’s West Hills that’s famous for sporting signs honoring Portland Trail Blazers Jerome Kersey and a giant martini has been put up for sale at $9,495,000 .

The owner, financial advisor Ron Sloy, who was dubbed “Really Tan Portland Ken” by the NBA on TNT crew , poured more than $3 million into the property that already had a pricey start: In 2001, building costs rose to $8 million.

As much as people can see the landmark house, the 0.36-acre property at 1305 S.W. Myrtle Court has its own views: Beyond the city skyline and Willamette River are Mounts Hood, Adams, St. Helens and Rainier.

The house has 7,581 square feet of living space that includes two bedroom suites, a guest bedroom, a billiard-game area and a lounge with climate-controlled wine storage for 5,000 bottles.

The two-lane lap pool extends along one deck for 75 feet, setting a scene more likely in Beverly Hills than the Pacific Northwest, said Sean Gores of the design-build firm Gores Construction in Milwaukie, who recently updated the structure’s weatherproof exterior as well as the energy efficiency and aesthetics of the mansion that was originally designed by Robert Thompson of TVA Architects of Portland.

Gores added a seven-foot-wide skyline system that spans about 80 feet, illuminating the top level of the mansion with natural light. The four decks have half-glass railings.

Some interior walls were removed to open up the views and contemporary finishes, like Ann Sacks’ tile made in Italy, and fixtures were installed.

Being able to easily entertain guests guided the placement of multiple bars — there’s even one in the three-car garage — and wide screens, including a 100-inch one in the expansive living room.

More than $250,000 was spent on improving the power for more efficient indoor temperature as well as automated blinds, a sound system and security.

Who would love this house? A sports figure or successful business person who falls for the views, the design and the fact that this is one of a kind, said Gores.

Justin Harnish and Errol Bradley of Harnish Properties, who listed the property on Thursday, Aug. 5, said in marketing materials: “From the German engineered stainless-steel front door and window package down to the imported stone slabs, using the word ‘spectacular’ [to describe the home] is an understatement.”

• 25 of Portland’s most expensive home sales revealed: From NBA’s Evan Turner’s $3 million pad to $6.3 million riverfront estate • 2021 Street of Dreams home tour: Builders, designers return with ideas from crowd-pleasing to over-the-top • What’s the benefit of pricing a home at less than fair value? Bidding wars. The tale of twin townhouses Twin Beaverton townhomes in original condition with the same floor plan were put up for sale at different asking prices – $299,000 and $360,000 – in late May. Both have a fireplace in the living room, two bedroom suites under vaulted ceilings and a garage.Both received an accepted offer within five days.In the end, […] 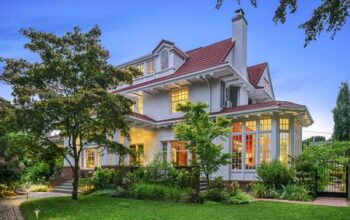 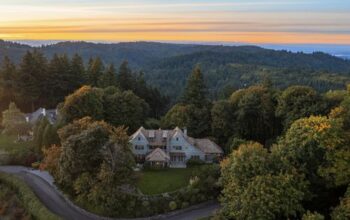 A modern chateau, near Portland’s Pittock Mansion, is for sale at $5 million 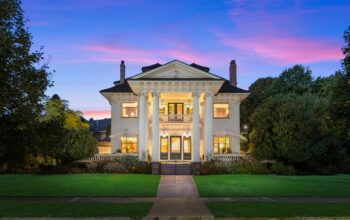